What Will COVID-19 Do to the Sustainable Development Goals? 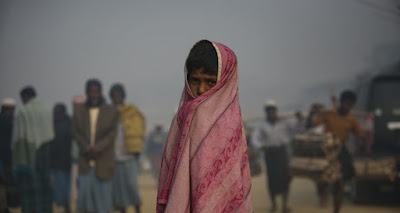 A child is seen in the Balukhali Rohingya Refugee camp on February 1, 2018, in Chittagong district, Bangladesh. UN Women/Allison Joyce

The economic impact of COVID-19 could increase global poverty for the first time in three decades, pushing more than half a billion people – or 8 percent of humanity – into poverty, according to a new paper published last week by the United Nations University World Institute for Development Economics Research (UNU-WIDER).

“We were surprised at the sheer scale of the potential poverty tsunami that could follow COVID-19 in developing countries,” one of the study’s authors, Andy Sumner of King’s College London, said in a press release.

The study estimates the impact on global poverty levels based on three scenarios of low (5 percent), medium (10 percent) and high (20 percent) short-term declines in per capita income (or consumption, depending on available country data). In the worst scenario of a 20 percent economic decline, 419 million more people would be living in extreme poverty on less than $1.90 a day. But that number would increase to 500 or 600 million people if using the lower-middle-income country poverty line of $3.20 per day or the upper-middle-income poverty line of $5.50 per day. Meanwhile, if per capita income or consumption contracts just 5 percent, 85 to 135 million people would be pushed below the international poverty lines. In essence, COVID-19 could reverse a decade of global progress on reducing poverty, the study’s authors say. 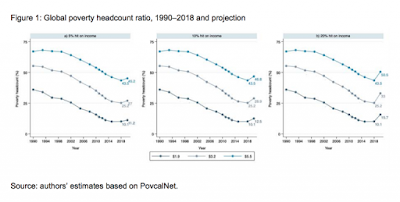 Sub-Saharan Africa, for example, is at least for now lagging behind Europe and the U.S. in coronavirus infections and deaths, but the economic impacts are already being felt. The World Bank and the International Monetary Fund (IMF) are projecting that for the first time in 25 years, the region will go into a recession. Especially with the continent’s extremely large informal economy, in which most workers survive on daily wages and have no savings or stockpiles of food, social distancing measures are far more economically devastating than in developed countries. At the same time, because daily work is a matter of survival for so many, authorities in some countries are having a difficult time enforcing lockdowns. Additionally, millions of migrant workers now no longer have the means to send money back home to family members in poorer countries who depend on those remittances.

According to the study, 80 to 85 percent of people “newly living in poverty” – on less than $1.90 a day in the case of a 10 percent contraction – would be in South Asia and sub-Saharan Africa. But East Asia will also be hit particularly hard, especially if a broader definition of poverty – living on less than $3.20 or $5.50 – is applied.

“This study shows that the achievement of the 2030 Agenda, and in particular, the [Sustainable Development Goals] on no poverty and zero hunger, is under considerable threat,” Kunal Sen, the Director of UNU-WIDER, said in a press release. “The need of the hour is to bring together development agencies, national governments, civil society and the private sector in a global effort to protect the livelihoods and lives of the poorest of the poor in the Global South.”

Oxfam International, for example, called on world leaders last week to implement an Economic Rescue Plan for All that would mobilize at least $2.5 trillion dollars to “support developing countries to stop the pandemic and prevent global economic collapse.” The plan includes the immediate suspension of $1 trillion in debt repayments by poor countries, a $1 trillion stimulus by the IMF and an additional $500 billion in aid.

This week, the Group of Seven (G7) finance ministers and central bank governors publicly announced they would suspend about $20 billion worth of debt repayments for 76 of the world’s poorest countries. G20 finance ministers endorsed a suspension at least until the end of the year.

“We can only beat this virus through coming together as one,” wrote Oxfam. “Developing countries must act to protect their people, and demand action from rich nations to support them. Rich country governments must massively upscale their help – led by the G20.”

Without a massive injection of relief, the charity warned, “over half the global population could be living in poverty in the aftermath of the pandemic.”

Joanne is a freelance journalist dedicated to covering global poverty and inequality. Her work has appeared in Humanosphere, the Guardian and War is Boring